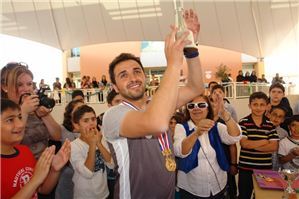 Finals for the highly anticipated SABIS® staff and students sports tournamentwere held at ISC-Erbil during the Open House day on April 21, 2012. ISC-Erbil pulled away with three impressive victories in football, basketball, and volleyball.

Staff and students participated in the table tennis competition in which Emad Noureddin Shakir from ISC-Erbil continued to dominate and won the title once again.  The second place medal went to Salam Abdulrahman Sabri from Sardam International School. The girls of ISC-Erbil triumphed in the 100 meter sprinting finals with Sima Sarbast finishing first. The second place went to Daryna Shadi Sarhan and the third place to Sardilia Sarteep Kakai. Finally, the boys’ 100 meter sprinting contenst concluded with a 1st place victory for Salam Abdulrahman Sabri from Sardam International School. Second place went to Delghash Farman Mala from Soran International School, and Mohammed Maouloud from ISC-Erbil rounded out the top three on the podium.

The event attracted a diverse range of participants and audiences. All participants played hard and showcased their sportsmanship during this tournament. Trophies and medals were given out amid loud cheers for the winning individuals and teams. A high level of community support made the tournament a great success, fueling the desire for future tournaments.